Sicily is the largest island in the mediterranean, a 90 mile catamaran ride or just a quick 30 minute flight away from my home, Malta.  It is part of an autonomous region of Italy, together with the surrounding minor islands, and is known as the Regione Siciliana (source: Wikipedia)

I’ve visited Sicily three times now, and twice was in the western side of the island, near the city or Comune of Trapani.  Trapani is the capital of the Province of Trapani, and a very active, important fishers port.

Much of Trapani’s economy still depends on the sea. Fishing and canning are the main local industries, with fishermen using the mattanza technique to catch tuna. Coral is also an important export, along with salt, marble, and marsala wine. The nearby coast is lined with numerous salt-pans.

The city is also an important ferry port, with links to the Egadi Islands, Pantelleria, Sardinia, and Tunisia. It also has its own airport, the Trapani-Birgi Airport.

Antica Erice is the old city on top of Trapani, and can be visited by car, although it can take up to 1 hours drive to get up the mountain, or via a quick cable cart ride to the top. I recommend the cable cart, as you get amazing views over the city, the sea and the salt pans.  During the weekend, you can often see hikers and bikers, the local daredevils, going up and down the mountain, on make shift path ways, in between the trees.

In Erice, you’ll find the typical Sicilian pastries such as Pasticcini di Pasta di Mandorle which are almond dough cookies (gluten free and safe to eat for Celiacs), Cannoli, marzipan and more, aside from amazing views off the mountain, and basically, the whole village is a historical centre, including the churches, the cobblestone roads and the houses.  Be careful for one thing up there though, it can be a lot chillier then down the mountain and the cable cart will stop working once it starts raining, and you may end up having to find alternative means down.  Don’t let that stop you from visiting the place though, it is quite something! 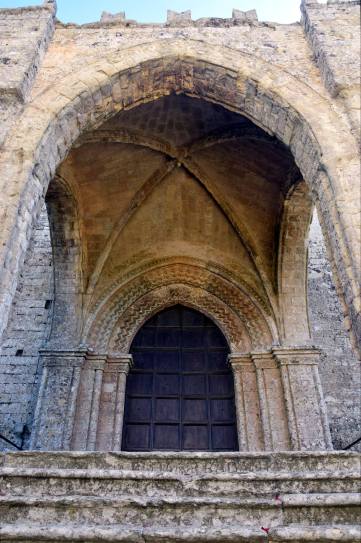 Some of my “things to do in Erice” include:

If museums are not your thing, you can also just walk around and get (slightly) lost in the ancient city itself.  Do try the pastries at the coffee shop near the entrance, you can buy them there to go as well, per weight pre-packed, or if you prefer specific pastries (i.e. almond-pastry -all-you-can-eat for me), you can also go further in and chose from the large section of pastries, marzipan and other goodies on display there.

Obviously, being a touristic attraction, you’ll also be able to find a good number of souvenir shops, with locally made pottery and ceramics, in all colours, sizes and shapes.  Simply gorgeous.  I have a couple of bowls that I bought there, in bright summary colours. I’m also a magnet fan, and I can tell you, there is plenty of choice!

Back in Trapani, down the mountain,  I recommend walks through the charming town, or on the promenade up to Torre Ligny.  You can visit the tower itself as well (paying) and walk around it. It is a beautiful spot to look at the sunset, and take some photos there.

Food is a hard choice in Trapani. Not because there is no good food, au contraire, there is plenty of good food to find, especially if you like fish.  Likely the fish was surely much caught the same morning, kept on ice to keep cool and tasty till dinner time, and served without being frozen or preserved in any way.  Aside from fishing it yourself and cooking it straight away, I doubt there is better ways to get fresh goodies on your plate.

The 2 places I love to share with you are Ristorante Antichi Sapori, based near our B&B, and Salamureci, just on the road to the Torre Ligny.  Salamureci is a B&B as well, but we only had dinner there.

Antichi Sapori specialises in the cucina Trapanese, or the local Trapani cuisine, which is based mostly on fish.  They serve the most amazing seafood pasta with fresh mussels and clams, carpaccio of fresh fish, sardines meatballs with fennel and plenty more to mention.  In summer, they have a large terrace outside where you can tuck in and enjoy your meal.

Salamureci’s theme is slightly more modern then the first restaurant, but their food is equally delicious.  The tomato mussel soup I’d love to have the recipe for, and the typical mediterranean antipasti such as rice balls, pickled octopus and more are definitely recommended.

Now that our tummies are full with delicious food, we have the energy to visit some places.

Local fish market – the fish is actually still alive at the market, being kept fresh and breathing by the fisher men. Single ladies, if you’re looking for a Fisherman husband, there are plenty proposals to be had!  Not that they are the most handsome men, but they will keep you happy and healthy with daily fresh fish!

Bastione Conca Trapani:  these are the bastions that used to defend Trapani.  Perfect for bird (photo) shooting especially if you like large sea gulls, evening walks and sunsets.  Lead up to Torre Ligny

Torre Ligny: this is the coastal watch tower, constructed in 1671 – 1672.  Currently it functions as an archeological museum.  You can visit the tower itself or you can pass around it on a narrow walk way, which is secured with a sturdy railing.  Perfect spot to see the sun go down.

San Vito Lo Capo is located in the north-west of Sicily, in between mountains, and has a sandy beach which is very popular with local vacationers.  The mountains are very popular with mountain climbers and also have a number of caves which are not recommended to access without professional gear. To the south of San Vito Lo Capo, you can also visit the natural reserve, Riserva Naturale dello Zingaro

Museo delle Saline: Small but interesting museum on the production of salt, you can also walk around the salt panes and take photos there.  Safe to say, that’s pretty much what we did 🙂

Grotte Mangepiane: This is an abandoned village, in which a small community used to live till the 1950s.  You can visit the barber, puppet maker, shoe maker and other shops and stores to see how these people lived in the caves.  The area is now an open-air museum and can be visited.  The people there who maintain it, are very friendly and happy to explain more when you ask.

Santuario di Maria SS. di Custonaci:  A beautiful church dedicated to Santa Maria di Custonaci. Definitely worth a visit, but make sure you don’t visit on Sunday around high noon. Mass will be held and the church will not be visitable for tourist.  Please do notice the stone mosaic floor outside which paves up the way to the church entrance and covers the square around it.

Bar Gelateria Vassallo:  just next to the stairway to Santa Maria di Custonaci, you can find this ice cream shop.  The people in it are usually locals, who will look at you walking in,  but let that not scare you away. This place doesn’t only serve really good strong espresso but also the most delicious, refreshing Sicilian “Granita” that I’ve ever tasted.  A bit rougher than sorbet, and filled with fresh lemon juice and oh so much sugar.  But still totally worth the try.

The above list is not exhausted yet, as I haven’t mentioned the Saline reserve yet, or the migrating flamingos, the salt panes of Nubia, Scopello for Pane Cunzatu (Bread with Olive oil, oregano, pepper, salt, tomato, anchovy and cheese), Castellamare del Golfo and may more.

So if you’re interested in visiting Trapani and it’s surroundings or Sicily itself, definitely do not hesitate (and bring back some Almond Pastries – they keep up to 2 months in the fridge)

If you want to see more photos, you can find some below here and also on my film roll on Flickr

This site uses Akismet to reduce spam. Learn how your comment data is processed.

#throwbacktime to my last visit to my other home, wintery, rainy but oh so green and pretty Belgium. Enjoy x